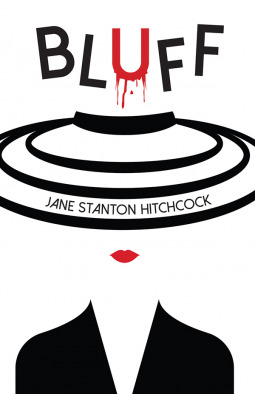 From Goodreads:   One-time socialite Maud Warner polishes up the rags of her once glittering existence and bluffs her way into a signature New York restaurant on a sunny October day. When she shoots Sun Sunderland, the "Pope of Finance," as he lunches with "accountant to the stars" Burt Sklar - the man that she's accused for years of stealing her mother's fortune and leaving her family in ruins - she deals the first card in her high-stakes plan for revenge.

Maud has grown accustomed to being underestimated and invisible and uses it. Her fervent passion for poker has taught her that she can turn a weakness into the strength to take advantage of people who think they are taking advantage of her. It's uncanny how she reads them.

Her intimates in New York high society believe that "Mad Maud" accidentally missed Sklar, her real target. But nothing is as it first appears as she weathers the unexpected while following her script. And while Maud is on the run, the dark secrets of men who believe their money and power place them above the law will be exposed. Betrayal, larceny, greed, sexual battery, and murder lurk beneath the surface of their glittering lives.

One unexpected twist after another follows as we watch a fierce, unapologetic Maud play the most important poker hand of her life. The stakes? To take down her enemies and get justice for their victims. Her success depends on her continuing ability to bluff. And on who will fold.

Can she win?
My thoughts:  With its striking cover and  promise of a story about New York high society,  this book caught my eye.  Until its release, I'm planning to sample the author's Jo Slater series:  Social Crimes (book one) and One Dangerous Lady (book two).
This Can't Wait Wednesday post was originally composed and/or compiled and published by Catherine for the blog, bookclublibrarian.com.  It cannot be republished without attribution. Sharing this original post on Twitter, Google+ and/or other blogs with appropriate recognition is appreciated
Posted by Catherine @ Book Club Librarian at 12:00 AM