Today I'm featuring an upcoming read, The Killing Lessons by Saul Black  The excerpt shared is from the hardcover version I borrowed from the library. 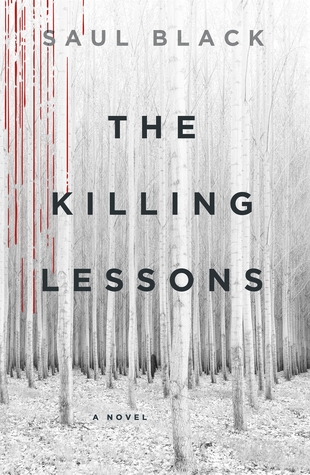 The instant Rowena Cooper stepped out of her warm, cookie-scented kitchen and saw the two men standing in her back hallway, snow melting from the rims of their boots, she knew exactly what this was: her own fault.  Years of not locking doors and windows, of leaving the keys in the ignition, of not thinking anything like this was ever going to happen, years of feeling safe--it had all been a lie she'd been dumb enough to tell herself.  Worse, a lie she'd been dumb enough to believe.  Your whole life could turn out to be nothing but you waiting to meet your own giant stupidity.  Because here she was, a mile from the nearest neighbor and three miles from town (Ellinson, Colorado; pop. 697), with a thirteen-year-old son upstairs and a ten-year-old daughter on the front porch and two men standing in her back hallway, one of them holding a shotgun, the other a long blade that even in the sheer drop of this moment made her think machete, though this was the first time she'd ever seen one outside the movies.  The open door behind them showed heavy snow still hurrying down in the late afternoon, pretty against the dark curve of the forest.  Christmas was five days away.

What do you think?  Would you continue reading?
I'm struck by the mental dialog of the narrator related to the unfolding scene.  She is extremely frightened, and you can feel the adrenaline pumping in her veins.