Today I'm featuring an upcoming read, Ladies Who Punch.  The excerpts shared are from the hardcover edition I borrowed from the library. 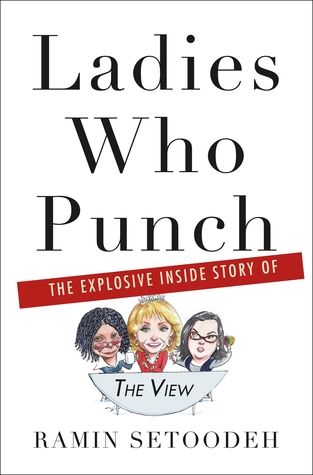 
Barbara Walters was creating a scene.  Not that she minded it.  As the most powerful woman in the news business, her mere presence at Spago in Beverly Hills infused the room with an aura of royalty.  The chef came over to welcome her.  Other patrons leaned over their plates to get a better look.  Any meal with Barbara was always an intimidating exercise, which started with her dropping the names of some people she'd recently run into: Hillary Clinton, Michael Bloomberg, Jennifer Lopez, and more.  On this evening in the winter of 2007, her dining companion--Brian Frons, the president of ABC Daytime--tried his best to keep up.


For a long time, nobody had any clue why Barbara Walters--who symbolized the gold standard of the TV news business--would dip her feet in the murky waters of daytime.  This was the genre that gave rise to paternity tests, plastic surgery, and "too fat to wear."  In 1983, a serious broadcaster named Sally Jessy Raphael started a talk show with the goal of tackling lofty societal issues.  But a few years in, she caved and went the tabloid route.  All her competitors were doing the same.  Geraldo Rivera staged so many fights he ended up with a broken nose during an episode called "Teen Hatemongers."  Maury Povich made a cottage industry out of unfaithful boyfriends.  Jenny Jones was on a constant search for guests who didn't know their real daddies.  Jerry Springer presided over a circus of angry misfits who threw chairs and fists.  The nuclear arms race for smut TV was the complete opposite of Barbara's brand, as an erudite ambassador of world news--with access to everybody from Barbra Streisand to Mu'ammar Gaddafi.
What do you think?  Would you continue reading?
The revolving cast of high profile cohosts on The View ranks right up there with the types of "hot topics" discussed on the show itself.  I'm planning to read this book for sheer entertainment value.


This First Chapter ~ First Paragraph post was originally composed and/or compiled and published by Catherine for the blog, bookclublibrarian.com.  It cannot be republished without attribution. Sharing this original post on Twitter and/or other blogs with appropriate recognition is appreciated.
Posted by Catherine @ Book Club Librarian at 12:00 AM