Today I'm featuring a recent blog tour read, Death by Dissertation by Kelly Brakenhoff.  It's the first book in the new Cassandra Sato mystery series. The excerpts shared are from the eBook I received from the publisher in exchange for an honest review. 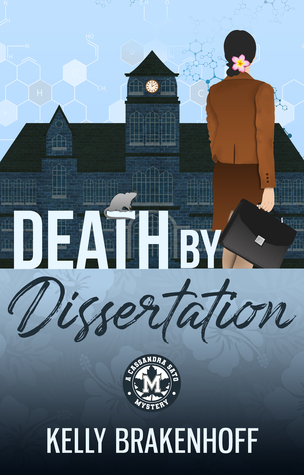 Beginning: Chapter One
Cassandra Sato cradled her palms around her warm Morton College travel mug, hoping the coffee inside would calm the churning in her stomach.  Half anticipation, half impatience at wasting her time, uncertainty was the last thing she needed her boss to see at the start of their probationary coaching meeting.  She fixed a serene expression on her face, pretending to admire the view from his picture window, while reviewing her mental list of the issues he might raise.  As the youngest person to earn a doctorate in education from the University of Hawai'i at age 28, she had years of practice appearing more mature and confident than she felt.  Still, feeling confident in the tropical sunshine of Manoa was much easier than squirming on an antique wooden armchair in Carson, Nebraska--population 8,300--in an office that best resembled a British men's club.


********************
56% of eBook (approximately):  Normally, she would have immediately dismissed his suggestion and fled upstairs to work.  Some impulse--and Dr. Nielson's reminder to get out of her office more--led her to accept his invitation.
********************
My thoughts:  Death by Dissertation is an engaging mystery with puzzling clues that introduces readers to a plucky protagonist.   Insider observations and a realistic portrayal of campus politics and life in a small college town and the personable cast of characters make this novel a promising start to the series.

You can read my review here and enter a giveaway.

********************
From Goodreads:  Ambitious Cassandra Sato traded her life in Hawai'i for a dream position as Student Affairs VP at Morton College in tiny Carson, Nebraska. She expected the Midwestern church casseroles, land-locked cornfields, and face-freezing winters would be her biggest challenges, but it's her job that's rapidly becoming a nightmare.

A deaf student is dead and the investigation reveals a complicated trail of connections between campus food service, a local farmer's beef, and the science lab's cancer research. Together with her few allies, Cassandra must protect the students caught up in the entanglement.

Dealing with homesickness, vandalism, and a stalker, Cassandra is trapped in a public relations disaster that could cost her job, or more. No one said college was easy.

Get to know Cassandra and her new friends at Morton College.

Posted by Catherine @ Book Club Librarian at 12:08 AM