Today I'm featuring the opening from an upcoming read that I checked out of the library last week . . . 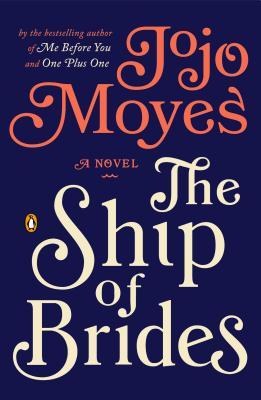 The Ship of Brides by Jojo Moyes

The first time I saw her again, I felt as If I'd been hit.

I have heard that said a thousand times, but I had never until then understood its true meaning: there was a delay, in which my memory took time to connect with what my eyes were seeing, and then a physical shock that went straight through me, as if I had taken some great blow.  I am not a fanciful person.  I don't dress up my words.   But I can say truthfully that it left me winded.

Letty McHugh halted the pick-up truck, wiped non-existent soot from under her eyes, and noted that on a woman with "handsome features," as the saleswoman had tactfully defined hers, Cherry Blossom lipstick was never going to alter much.  She rubbed briskly at her lips, feeling stupid for having bought it at all.  Then, less than a minute later, she reached into her bag and carefully reapplied it, grimacing at her reflection in the rear-view mirror.

What are you reading now or planning to read soon?
First Chapter ~ First Paragraph #87 was originally published by Catherine for bookclublibrarian.com.  This post cannot be republished without attribution.


Posted by Catherine @ Book Club Librarian at 12:00 AM