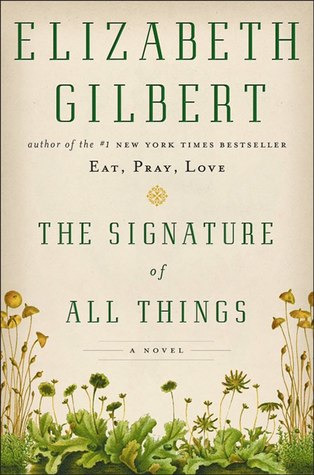 This is my current read, which is this month's selection for one of my book clubs.
Beginning:  Prologue
Alma Whittaker, born with the century, slid into our world on the fifth of January, 1800.
Swiftly--nearly immediately--opinions began to form around her.
--------------------------------------------
Part One
The Tree of Fevers
Chapter 1
For the first five years of her life, Alma Whittaker was indeed a mere passenger in the world--as we all are passengers in such early youth--and so her story was not yet noble, nor was it particularly interesting, beyond the fact that this homely toddler passed her days without illness or incident, surrounded by a degree of wealth nearly unknown in the America of that time, even within elegant Philadelphia.
*********************
Page 56:  "On her father's lap, Alma learned that Henry had sailed the world with a great man named Captain Cook.  These were the best stories of all."
*********************

Friday Focus: The Friday 56 & Book Beginnings #54 was originally published by Catherine for bookclublibrarian.com. This post cannot be republished without attribution.
Posted by Catherine @ Book Club Librarian at 12:00 AM

Email ThisBlogThis!Share to TwitterShare to FacebookShare to Pinterest
Labels: Book Beginnings on Fridays, Elizabeth Gilbert, Friday Focus, historical fiction, The Friday 56, The Signature of All Things