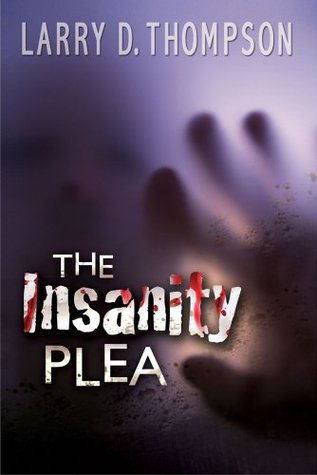 Today I'm participating in the Partners in Crime blog tour of The Insanity Plea by Larry D. Thompson ...

Synopsis . . . A young nurse is savagely killed during a pre-dawn run on Galveston’s seawall. The murderer slices her running shorts from her body as his trophy and tosses the body over the wall to the rocks below. As dawn breaks, a bedraggled street person, wearing four layers of old, tattered clothes, emerges from the end of the jetty, waving his arms and talking to people only he hears. He trips over the body, checks for a pulse and, instead, finds a diamond bracelet which he puts in his pocket. He hurries across the street, heading for breakfast at the Salvation Army two blocks away, leaving his footprints in blood as he goes.
Wayne Little, former Galveston prosecutor and now Houston trial lawyer, learns that his older brother has been charged with capital murder for the killing. At first he refuses to be dragged back into his brother’s life. Once a brilliant lawyer, Dan’s paranoid schizophrenia had captured his mind, estranging everyone including Wayne. Finally giving in to pleas from his mother, Wayne enlists the help of his best friend, Duke Romack, former NBA star turned criminal lawyer. When Wayne and Duke review the evidence, they conclude that Dan’s chances are slim. They either find the killer or win a plea of insanity since the prosecution’s case is air tight. The former may be a mission impossible since the killer is the most brilliant, devious and cruel fictional murderer since Hannibal Lecter. The chances of winning an insanity plea are equally grim.
It will take the combined skills of the two lawyers along with those of Duke’s girlfriend, Claudia, a brilliant appellate lawyer, and Rita Contreras, Wayne’s next door neighbor and computer hacker extraordinaire, to attempt to unravel the mystery of the serial killer before the clock clicks down to a guilty verdict for Dan.
The Insanity Plea is a spell-binding tale of four amateur sleuths who must find, track and trap a serial killer as they prepare for and defend Wayne's brother who is trapped in a mind like that of John Nash, Russell Crowe’s character in A Beautiful Mind.
Combining legal thriller with tracking a serial killer, Thompson once again takes the reader on a helluva ride, right up to the last page and sentence.

My Review . . . The prosecution appears to have a rock solid murder case against Dan Little, a once brilliant attorney whose paranoid schizophrenia has turned him into an unstable Galveston street person estranged from his family.  When his brother Wayne, also an attorney, agrees to represent him, the race is on to defend Dan by using an insanity plea--a complicated legal task in itself--and ultimately prove his innocence by finding the real killer.  Can Dan be rescued from the ravages of his mental illness?  Can his defense team chip away at the State's case, or will Dan be the fall guy for a crime he didn't commit?  Can the real murderer, a serial killer, be stopped before striking again?  Against seemingly insurmountable odds, Wayne and his circle of loyal friends and colleagues pull out all the stops to prevent a gross miscarriage of justice.

The Insanity Plea is a taut legal thriller with intense action and courtroom drama. The fast-moving plot, compelling characters, and bold unexpected maneuvers make for a highly suspenseful read. In addition to delivering a gripping tale that keeps readers rapidly turning pages until the very end, author Larry Thompson infuses the story with interesting details about the history of Galveston.

Larry D. Thompson is a veteran trial lawyer and has drawn on decades of experience in the courtroom to produce riveting legal thrillers. After graduating from the University of Texas School of Law, Thompson founded the Houston trial firm where he still serves as managing partner. The proud father of three grown children, he lives and works in Texas but spends his summers in Colorado, where he crafts his novels and hikes the mountains surrounding Vail. His greatest inspiration came from Thomas Thompson, his brother, who wrote many best-selling true-crime books and novels.


Disclaimer . . . I was given a copy of The Insanity Plea in exchange for an honest review.


Posted by Catherine @ Book Club Librarian at 12:00 AM